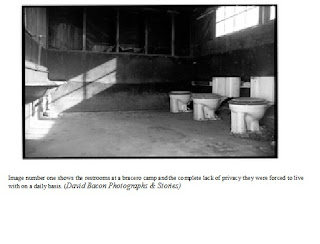 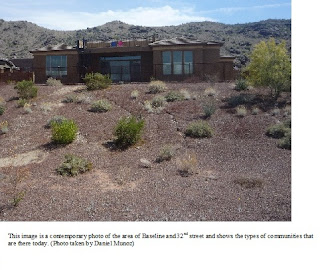 E. Baseline Rd. and S. 32nd Street St., Phoenix
The Bracero program was a number of different laws and contracts between the United States and Mexico that helped the United States meet its high labor shortages as a result of world war two. The program allowed the United States to create approximately 4.6 million contracts and employee roughly four million workers from Mexico in order to perform manual labor. These individuals were taking undesirable jobs in undesirable locations and all for a fraction of what American citizens were being paid. This immigrant labor force was not only significantly cheaper but it was also very skilled when it came to agriculture, the majorities of these individuals were either farmers or had some type of experience in the field. The program initially started in the southwestern states such as California and Arizona but eventually spread throughout the United States. The program as expected increased the agricultural output and assisted farm owners by supplying a cheap and affective labor force that was utilized in all but a few states. As the war began to come to an end so did the bracero program. As soon as this labor force was no longer needed they were either deported or aggressively persuaded to move back to Mexico. “Ok, Boys, it’s time to go back” (Herrera-Sobek 48-49) this quote is what was told to a bracero who was forced to go back to Mexico after he had already established a new life in California. “Over the program’s 22-year life, more than four million Mexican nationals were legally contracted for work in the United States, some individuals returned several times on different contracts”(America). The end of the program was in 1965 after many extensions it was decided that the program was no longer going to run and plans for deportation and removal began. Arizona was one of the many states that took advantage of the increase in agricultural labor. There were bracero camps located throughout Arizona including the area that is today known as 32nd street and Baseline. This specific camp is located approximately twenty minutes southwest of Arizona States Tempe campus. All of the Arizona camps where very similar in that the braceros stationed at these locations were responsible for repairing “irrigation, picking cotton, cucumbers, lemons, oranges and tomatoes” (Ignacio). During the programs time span the corner of baseline and 32nd street was mostly comprised of braceros and migrant workers. Today there are three different gated communities in the area: Hunter Ridge, The Village at South Mountain and a new upper scale community known as the Dessert Rose. These communities have the luxury of having the canal flow right in front of their neighborhood with dual path walkways and it even has a Starbucks across street. When the area was considered undesirable the inhabitants were migrant workers and braceros, however, now that the location is being remolded it is experiencing larger influxes of homeowners with white collar jobs who desire upper scale housing which the area now provides.
- Daniel Munoz and Amanda Nishikubo
References
Alvarez, Ignacio I. "Ignacio I. Alvarez." Interview. Bracero History Archive. Web. 23 Apr. 2011. <http://braceroarchive.org>.
"America on the Move | Opportunity or Exploitation: The Bracero Program." National Museum of American History. Web. 05 Apr.
"Bracero History Archive | Teaching." Bracero History Archive | Home. Web. 5 Apr. 2011. <http://braceroarchive.org/teaching>.
"Braceros: The Story of a Union Organizer." David Bacon Photographs & Stories. Web. 26 Apr. 2011. <http://dbacon.igc.org/TWC/b03_Organizer.htm>.
"Chicanos and Mexican Americans." Latin American Studies. Web. 26 Apr. 2011. <http://www.latinamericanstudies.org/braceros.htm>.
Herrera-Sobek, Maria. The Bracero Experience: Elitelore versus Folklore. Los Angeles: UCLA Latin American Center Publications, University of California, 1979. Print.
Posted by Wendy Cheng at 11:37 AM